On Tuesday, April 12, 2016, at 8 p.m. in Little Theatre, both Greeks and non-Greeks alike came out to become aware of child abuse while supporting the contestants.

Since 1997, an event has been held to bring awareness to child abuse. This event is The Greek God and Goddess Pageant, hosted by Lambda Tau Omega Sorority, Inc. in honor of its philanthropy, The Blue Ribbon Campaign.

April is reserved as National Child Abuse Prevention Month, befitting for the sorority’s pageant and the purpose it serves.

As the doors opened and attendees were invited in, music ushered them to their seats, ranging from hip-hop to country, throwing in a little of Frozen’s “Let It Go,” appealing to students’ wide music preferences. Music during the pageant was provided by DJ Nix in the Mix.

There were hardly any empty seats, occupied with eager attendees awaiting the contestants to take the stage.

“It is important for everyone to have the knowledge of abuse or violence not just being physical but the different ways it may occur…,” Sanchez stated. “This pageant brings awareness to the background of this issue as well as teaching the contestants and audience on various ways to handle a situation if it was to ever occur to them.” 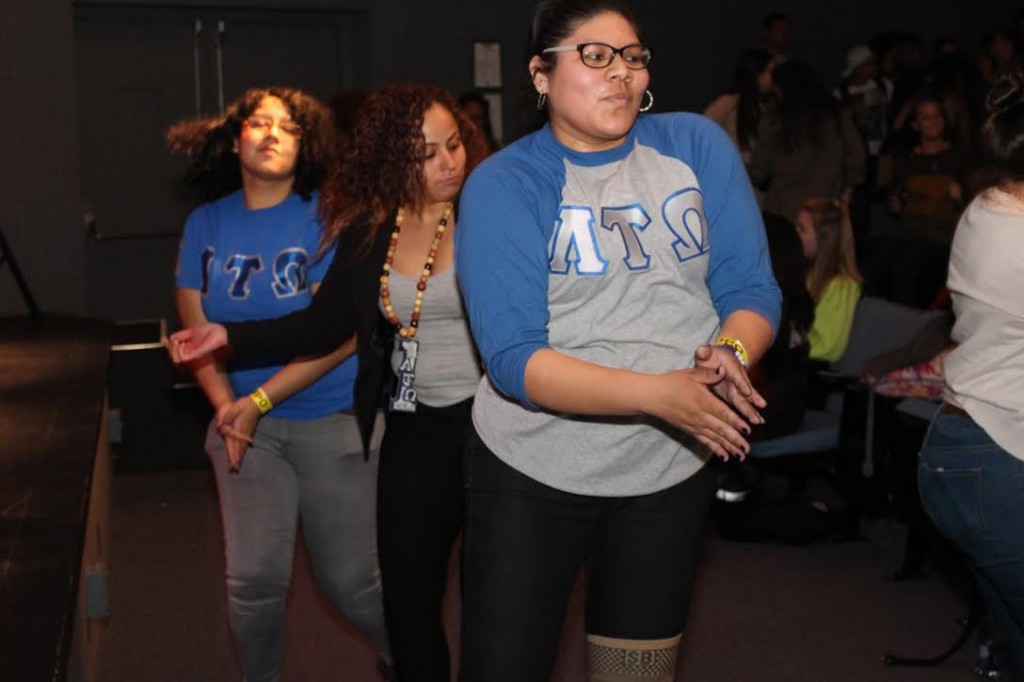 There were three judges to determine the Greek God and Goddess. Sandra Espinal, who is the sorority’s advisor and also the Coordinator for Student Leadership Programs at the Center for Leadership and Service (CLS), Rosa Paulina, who is an Academic Support Specialist for School of General Studies, and Alyson Montalvo, who is an alumna sister of the sorority’s Heptakin Eta Chapter from Seton Hall.

The Greek God and Goddess contestants were:

The Greek God and Goddess Pageant was broken into three categories: para wear, talent and evening wear and Q&A.

The pageant kicked off with Vasquez saying one of his favorite parts about Greek life is the diversity. Since this is Vasquez’s last year on campus, he decided to bring several of the shirts he’s collected over the years as a show of remembrance and a nod of appreciation to his fraternity Sigma Beta Tau.

Jones, who is new to Greek life, decided to wear the hat his friend bought him after he crossed and became a brother of his fraternity.

A popular choice among contestants was to represent their fraternities and sororities mascots. Perone brought a giant stuffed penguin on stage in representation of her sorority’s mascot. Meadows donned a fashionable lizard onesie, which is his fraternity’s mascot.

Meadows wasn’t the only contestant who wore bedtime attire on stage. Digennaro wanted to represent her sorority by wearing a unicorn onesie over her Greek letters shirt. She continued to explain to the audience that she wore her Greek letters fanny pack to show that she’s a true 1990s baby through and through. Digennaro commented that a passion of hers is awareness of melanoma. Her mother has a form of melanoma, and it was because of this association with the disease Digennaro is determined to increase awareness of it.

When asked about his Greek experience, Heunermun commented that his fraternity “teaches principles from the start.” After sharing the story of how he was going through a rough time after transferring the Kean University, not knowing anyone on campus, it were the men he would soon call brothers that helped him.

“They were there for me [then], and they still are to this day,” Heunermun stated.

The talent portion of the pageant came up next.

Viera sang “We Don’t Have to Take Our Clothes Off,” which is originally sung by Jermaine Stewart in 1986, and covered by Gym Class Heroes in 2006 and Ella Eyre in 1015. The Goddess contestant successfully showed her talent and vocal range, and attendees appreciated her talent.

Jones sang “Sure Thing” by the artist Miguel. As he started singing he got the audience to put its hands in the air and sway them back and forth in tune with the tempo. At points in the performance he even stopped singing to show off another talent of his, dancing.

Dancing made another appearance at the pageant. One of the few contestants who didn't sing was Perone. Instead, she danced to James Bay’s “Let It Go," earning her positive feedback from the audience at impressive moments in the routine.

Putting a unique spin on her talent of singing, Ostolaza performed the “Cup” song, complete with taking a seat center stage and singing a cappella, very Anna Kendrick-esque.

Meadows sang Kevin McCall’s “Compliments.” This song was selected by Meadows because he grew up in a group home, and this led to him learning that “not a lot of people know how far a compliment can go.”

The next contestant up was Digennaro, who sang “At Last” by Etta James. From the first note to the last, she had the support and encouragement from the audience.

Responsible for closing the talent portion of the night, Heunermun brought out an acoustic guitar to perform Oasis’ “Wonderwall.” It only took until the second verse for audience members to keep a well-maintained clap in tune for Heunermun. The next step for attendees was to sing along with Heunermun, and sing along they did. His performance came to a close with his brothers in the audience giving him a standing ovation.

The contestants' last opportunity to win the judges over was with their evening wear and Q&A. Keeping with the theme of the pageant, all questions addressed to the nine contestants pertained to abuse in various forms and degrees.

Lin was faced with the scenario of his teenager neighbor being bullied at school because of the activities the he chose to partake in. He was asked what advice he would give this teenager.

His closing statement was for his neighbor to take on the mindset of, “I’m better than you, but that doesn’t mean I’m better than everyone else.” Audience members applauded his advice as it can be applied it everyone's life.

Another response attendees appreciated was that from Digennaro. She gave the composed answer, “I’m proud to be who I am, and everyone should be proud to be who they are.”

As the judges were preoccupied with tallying the results, attendees wasted no time getting out of their seats and dancing to the music. Intermission could have easily been mistaken for a dance party.

There were nine contestants, four runner-ups and two winners. In third place, it was Meadows and Ostolaza. Second place was taken by Vasquez and Perone. The crown for Greek God was bestowed to Lin, and Digennaro was crowned as Greek Goddess.

The main focus of The Greek God and Goddess Pageant was to drum up awareness of The Blue Ribbon Campaign and child abuse. While succeeding with that objective, the pageant also served to bring together Greek members from the various organizations.

“This program would not be possible without all the organizations [who] participated as well as those who came to support,” Sanchez stated. “Lambda Tau Omega Sorority Inc. stands for ‘Excellence through Unity, Knowledge, and Dedication.’ These are the qualities the contestants brought with them.”

Alex Louis, Assistant Director of CLS, gave a heartfelt speech and stated, “I want to tell you how proud I am of you guys…you do an amazing job on and off campus.” This was when Louis announced that he will show his appreciation for all Greeks by hosting a party. The date and time will be announced at a later date.