A Graduate Assistant and Helping Hand

To excel in both the classroom at the graduate level and in the work space requires a sense of patience, time management, diligence, professionalism and a reason to give one's best effort everyday. For Robert Schiele, that reason serves as a purpose to uphold the good name of Kean University.

A graduate of Kean University in 2017 with degrees in criminal justice and psychology, as well as someone who is going for their Master of Arts in forensic psychology at the Nathan Weiss Graduate Program, Schiele's work is never done. Currently serving as the executive vice president of the Graduate and Part Time Student Council, Schiele's responsibility revolves around the graduation rate of Kean students and enhancing the cultural, social and educational standards outside of the classroom.

"I am a very gregarious individual [who excels] in helping others to success by enhancing the social, cultural, and educational standards outside the classroom of learning as it increases the graduation rate by 70 percent," Schiele said. "Beyond an educational standpoint, I try to enhance the community of Kean directly by listening to the voices of students. Also, I try to get students further involved at Kean. I don’t like to think of this as a position, but more as a helping hand, aiding students [and] amplifying their goals, interpersonal growth, and the Kean experience as a whole."

What started with a simple job application and campus involvement opportunities for Schiele evolved into a place with the Student Government for three years and nine months with the Graduate and Part Time Student Council. "Having previous knowledge of student government, the policies and procedures associated to Kean, and experience played a role in helping me be attributed to my current position," Schiele mentioned.

Schiele continued, "The best part of being a student leader is the memories made through making a difference. Being a leader changes your life for the better from the many experiences that are attributed to Kean and the students. My happiness comes from seeing students succeed and chasing their dreams. If within my term as a Kean leader I can assist scads of students by making Kean a more enjoyable place for them and contribute to improving their self-growth, I will do so in joy."

"You must fully understand that one thing might not work for everyone and you must change your mindset to accommodate and provide assistance to the individual. I am a stepping stone in guiding potential teachers fill out their requirements necessary to obtain their career," Schiele said. "One of the many things that I relish consists of self growth along with student growth. Both the students and myself teach one another. I am a person who is fond of learning new things, and every individual that I converse with presents something new."

Schiele's studies are always prioritized as he pursues his master's degree in his field of choice. Prior to finishing his undergraduate studies, Schiele had dreams of becoming a lawyer and getting into law school through completing a criminal justice degree, but would ultimately decide that more education was the key to success. He then pursued a second degree in psychology due to his interest in the subject and by finding out that he would have a better chance of getting into law school with the second degree.

"Further down the road, I found a truly spectacular major that I now adore, thanks to both Richard Conti, Ph. D., and Jane O'Brien, Ph. D. They helped enlighten my path for what I should truly become, a clinical neurologist."

Hailing from Toms River, New Jersey, Schiele attended Toms River High School East, but did not initially have an ideal college that he wanted to attend. Therefore, he chose to stay close to home and start his undergraduate studies at Ocean County College, as he believed that attending a school that was easier on the pockets would minimize his college loans at the time. Moreover, if he wanted to obtain a higher education than just at Ocean County College, he would be able to have the opportunity.

"I knew I wanted to go to college but was unsure of which one. I talked with numerous amounts of people, which helped me find out about how almost every freshman in college goes away and comes back the next year with a lot of debt. I thought to myself that I would try to minimize my college loans until I get into law school. I decided to stay close and found out that Ocean County College had a wonderful transition program with Kean."

That exact transition program landed him a new home at Kean University as soon as he finished his associates degree in criminal justice. While being on the Union campus for his four undergraduate years, his learning, professionalism and ambition were all honed and improved, making him a better student and person in the process.

"My undergraduate career has helped me in obtaining my current position, because if I never got involved with the Kean Ocean Criminal Justice Club, I would have never found out about my happiness in helping students acquire their goals," Schiele said. "I was not the type of person back then in trying new things, but I stepped out of my comfort zone and I am very appreciative to myself that I did. Both my majors have helped me in understanding policy and procedures along with keeping an open mind among others. Psychology is all about the human body while criminal justice relates to laws and social control."

Other leadership roles that the executive vice president took over included the role of president of Kean Ocean's Criminal Justice Club and the Kean Ocean vice president of Student Organization. Schiele felt that, in these experiences, he understood how much of a difference he could make for others.

"I used my previous skills and knowledge set for the better of the Kean community. I have increased the aforementioned with training to provide a better quality of support and direction."

The graduate student knows that whatever he does, it will always be for the benefit of others. Whether he is dedicated to helping to raise the graduation rate as the executive vice president of the GPSC or guide younger students through their journey at Kean as a graduate assistant, Schiele's open mind, outstanding listening skills and empathy for others has changed him for the better and into a person that people can rely on.

"Since every student is unique in their own way, you need to advance at everything afoot with an open mind. Everything revolves around students and without being able to understand you are maintaining a one-sided focus which is not in the best interest of either party. There is no student government without students," Schiele said. "Being a leader helped me understand the individuality of everyone and how people have their own perspective on topics. Everyone thinks there are two sides to every debate, but in reality, there are 926 million different sides. I have also learned how one minute can change the way a person thinks whether it be for the day or for a lifetime." 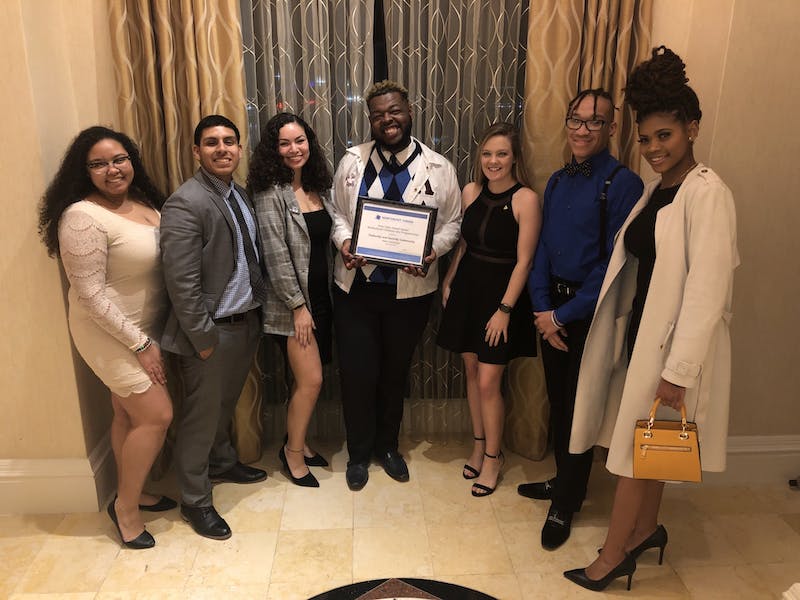