The ReelAbilities: New Jersey Film Festival at Kean University will be held from April 19 to April 22 at the North Avenue Academic Building.

On April 17, Kean University will host Abraham H. Foxman from Manhattan’s Museum of Jewish Heritage in a conversation titled Is Antisemitism Respectable Again? This event, which will be held in the Miron Student Center Little Theatre at 7:30 p.m., is only the first of a series of events taking place throughout April in honor of Genocide Awareness Month.

The Way to A Better Resume!

When entering college, focusing on building a resume and cover letter is a great step to consider.

The women’s volleyball team is hosting its one and only tournament of the spring semester on Sunday, April 15 at the Harwood Arena. The team is scheduled to play Seton Hall University, New York University, Bloomfield College, and the New Jersey Institute of Technology. Stevens University will also be attending; however, they will not be competing against Kean.

Kean University takes pride in the students ability to form new and interesting clubs and organizations. Kean has over 160 student groups on campus including funded and non-funded groups.

National Week Of Service At Kean!

National Volunteer Week at Kean University will take place from April 15 to 21. This week will consist of a variety of different volunteer opportunities including a blood drive, the ReInvent, ReUse, ReCycle Art Show, and Kean Day of Service, all hosted by the Center for Leadership and Service (CLS).

As part of its Earth Week celebration, the Earth Science Club will host Uniting Jersey for the Global Goals along with New Jersey Higher Education Partnership for Sustainability (NJHEPS), April 18 from 6 to 9 p.m. on the sixth floor of the North Avenue Academic Building, to teach the public about the United Nation's 17 Sustainable Development Goals.

As of April 5, Kean’s Student Organization has a new president-elect. Francisco Reyes was named president of the board for the 2018-2019 school year with 78.46 percent of the vote after the election period that took place from April 3 to April 5.

On April 4, the Lambda Theta Alpha Sorority hosted Flourish in the Miron Student Center’s Greek Lounge. The event had a purpose of celebrating self-love, natural beauty, and acceptance.

The deadline to submit your Clinton Global Initiative University (CGI U) application is coming fast.

Recycle The Way To Awareness

How many deadly items can impact animals in the ocean?

Cory Booker is the guest speaker for the Spring 2018 Undergraduate Commencement Ceremony, Thursday, May 17. The former mayor of Newark and current U.S. senator, will be delivering a speech to the class of 2018. More than 2,500 undergraduate students, 700 graduate students and their families are expected to be in attendance in the Newark Prudential Center, ushering in a new stage of life for the graduates.

Kean University will be hosting the finals of its annual Business Plan Competition Thursday, April 12 from 9 a.m. to 12:30 p.m. at the Little Theatre, Miron Student Center. 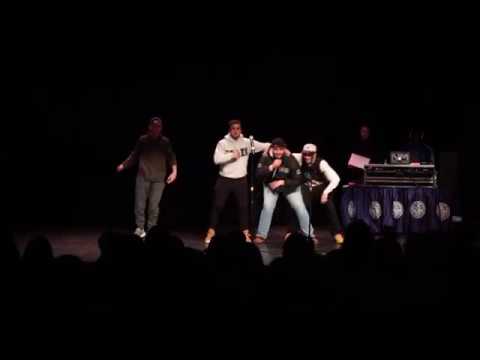 Campus Away From Campus

Kean University has campuses across New Jersey as well as one in China. However, one campus that is around the corner that students may not be so familiar with is the East Campus, located on 215 North Avenue, in Hillside, New Jersey.

On the evening of Thursday, April 5, over a dozen of Kean University's most talented and artistically gifted students made their way to the Miron Student Center (MSC) Little Theatre in the first-ever Kean's Got Talent talent show. From 7 to 10 p.m., amazingly talented students wooed the crowd with their creative songs, dance routines, poems, raps and other unique talents for a great cause.

On Tuesday, April 3, the Alcohol, Tobacco and Other Drugs Task Force (AToD) set out to educate students on sexual assault awareness.

On March 20, the Kean University field hockey team was awarded a Zag Field Hockey/NFHCA Division III National Academic Team Award. This award is only presented to teams that have an overall GPA of 3.0 or higher for the fall semester, which the Cougars met and surpassed with a team GPA of 3.6. Only 131 Division III Field Hockey teams, including the Cougars, earned the distinction this season.